In the first randomized controlled experiment of a multi-component intervention designed to shift schedules in hourly retail jobs toward greater stability, the Stable Scheduling Study found that increasing the stability of work schedules is possible and even profitable in today’s competitive retail environment. 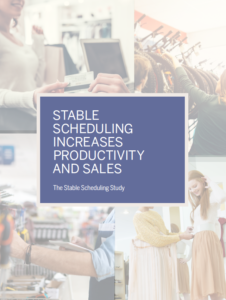 Contrary to the widely held assumption that schedule instability for employees is an inevitable outcome of the volatile retail business, this study demonstrates that giving employees more stability is not only possible, but it can increase sales and labor productivity, and offer a high return on investment.

The Stable Scheduling Study reflects a partnership between an interdisciplinary team that includes Joan C. Williams of the Center for WorkLife Law at University of California, Hastings College of the Law; Susan Lambert of the University of Chicago, School of Social Service Administration; and Saravanan Kesavan of the University of North Carolina Kenan-Flagler Business School; and the Gap, Inc.

The study began with a pretest that lasted from March 2015 to October 2015 in three Gap stores in the San Francisco Bay Area. At the end of the pretest, Gap decided to roll out two of the proposed practices to all of their U.S. stores as of October 1, 2015:

The full pilot, which included 28 stores in the San Francisco and Chicago metropolitan areas, ran from November 2015 to August 2016. For the full pilot, 19 stores were randomly assigned to the treatment condition and 9 stores were randomly assigned to the control condition. During the pilot, both the treatment and control stores continued to implement Two-week Advance Notice and Elimination of On-calls, along with the rest of the company’s stores. In treatment stores, five additional practices were added: